It’s becoming increasingly important for councils and governments to start managing coastlines in order to protect them from increasing coastal erosion and flooding due to altering sea levels. The reason for coastal management is obvious, to protect homes and businesses from being damaged and even destroyed by coastal erosion or flooding. Failure to do so can have severe economic and social effects, especially along coastlines which are used for tourism and industry (pretty much all of them).

When engaging in coastal management, there’s four key approaches that can betaken:

These are the most obvious defensive methods. Sea walls are exactly that. Giant walls that span entire coastlines and attempt to reduce erosion and prevent flooding in the process. They’re big, ugly and very expensive requiring constant maintenance so that they don’t fail. They also produce a strong backwash in waves which undercuts the sea wall making their long term sustainability questionable.

Traditionally, sea walls are large flat walls however more modern sea walls have a curved structure that reflects waves back into incoming waves, breaking them up and further reducing erosion.

Groynes are relatively soft hard engineering techniques. They’re low lying wooden walls that extend out to sea. The idea of groynes is to capture sand that moves down the beach via longshore drift and help build up a larger section of beach in front of an area that’s experiencing coastal erosion. The new beach will increase the distance that waves have to travel to reach the coast and, in the process, they’ll lose most of their energy, reducing their impact. Groynes are pretty effective but they have one major drawback. Groynes will remove a lot of the sand that’s present down-drift of the beach which will result in a thinner beach at this area. This, in turn, means that sections of the coast will be more exposed to erosion down drift of the groynes which can create new problems relating to coastal management.

Gabions are quite simply bundles of rocks in a metal mesh. They’re placed at the base of a cliff in an attempt to reduce the impact of waves on the cliff and prevent the cliff from being undercut. They’re not particularly effective and they’re quite unsightly but they’re sure as hell cheap.

Revetments are concrete (or in some cases wooden) structures that are built along the base of a cliff. They’re slanted and act as a barrier against waves not too dissimilar to a sea wall. The revetments absorb the energy of the waves, preventing the cliffs from being eroded. Revetments can be modified so that they have rippled surfaces, which further help to dissipate the wave energy. Revetments are normally successful at reducing coastal erosion but they are expensive to build. Once built however, they don’t require as much maintenance as a sea wall.

Riprap are just rocks and stones that have been put against the base of a cliff. They’re similar to gabions in their purpose but they aren’t bound together in a mesh. This makes them look slightly more appealing as they blend into the environment better however the rocks are susceptible to being moved by the sea.

Breakwaters are offshore concrete walls that break incoming waves out at sea so that their erosive power is reduced to next to none when they reach the coast. Breakwaters are effective but they can be easily destroyed during a storm and they don’t look particularly nice.

Big, retractible walls built across estuaries that can be used as a floodgate to prevent storm surges. They’re hugely effective but they’re also hugely expensive.

Land management is often used to help protect and rebuild dunes. Sand dunes act as a good barrier against coastal flooding and erosion and they can be exploited as a natural defence against the sea. In order to do so though, the dunes must be left relatively undisturbed so boardwalks are constructed and sections of sand dune systems are marked as out of bounds to the general public in order to reduce the erosion of the dunes by humans. This land management is discussed in more detail here.

Marshland can be used to break up the waves and reduce their speed, reducing the waves erosive power. The marshlands also limit the area which waves can reach preventing flooding. The marshlands can be created by encouraging the growth of marshland vegetation such as glassworts.

The goal of beach stabilisation is the same as beach nourishment’s goal, to widen the beach and dissipate as much wave energy as possible before it reaches the cliffs. Beach stabilisation involves planting dead trees in the sand to stabilise it and lower the profile of the beach while widening the beach too.

The Wirral is located in the north west of England, to the south of Liverpool. The Wirral is a peninsula meaning that three sides of the Wirral are surrounded by water while the fourth side is attached to the land. To the west of the Wirral is the Irish sea, to the north is the River Mersey and to the south is the River Dee. The Wirral did, and continues to in some areas, serve as an important port for the United Kingdom and today, sections of the Wirral’s coastline are used as reasonably popular tourist destinations. On differing sections of the Wirral’s coastline, different types of coastal defences have been employed in an attempt to reduce the impacts of coastal erosion on the coast. A combination of both hard engineering and soft engineering techniques have been employed.

New Brighton is at particular risk of coastal flooding and erosion due to its location. Located on the North West tip of Wirral, New Brighton receives a pounding from the sea. Waves that impact New Brighton are very energetic as they’ve got a strong fetch from the approximately 200km of water (the Irish Sea) that the New Brighton coast faces. In addition, a low pressure system around New Brighton means that storm surges are a common occurrence making the area particularly susceptible to flooding. This is worsened by the fact that most of New Brighton is only a few metres above sea level so only a relatively small storm surge would be needed to flood a large section of New Brighton.

In order to protect New Brighton, several sea defences have been employed. In order to protect against both coastal erosion and flooding, a large sea wall was constructed in the 1930s, known as the King’s Parade Sea Wall. The wall is 4m tall and stretches along 2.3km of coastline. It was constructed using leftover material from the construction of the Queensway tunnel. The wall is specially designed in order to reduce the impact of waves as much as possible and increase its lifespan at the same time. The top of the wall is curved slightly in order to reflect back waves that impact it and dissipate their energy. This helps reduce the rate at which the sea wall is worn down since it is, slowly, being worn away. This is one of the main issues with the wall, it requires a lot of attention and is expensive. 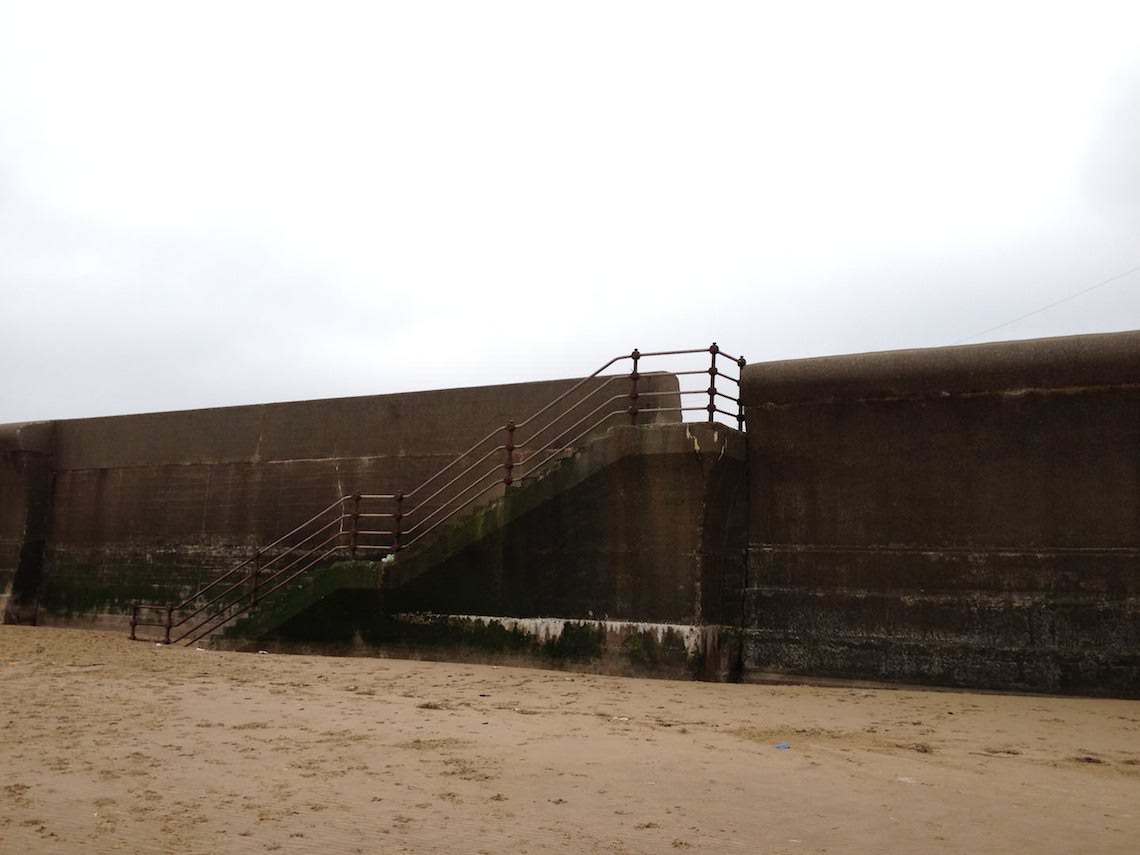 It has, however, been very effective at preventing both coastal erosion and flooding. The wall has produced 100m of ‘new’ land. In reality, this is land that was submerged by the sea but is no longer submerged since the sea can’t access it any more. In addition to this reclaimed land, there have been no cases of cliff collapse in many years and there have been no major floods either, suggesting that the wall is effective at preventing flooding.

In tandem with the sea wall, coastal zoning has taken place along New Brighton in an attempt to reduce the risk of flooding should the sea wall. The aforementioned 100m of reclaimed land is almost completely undeveloped, with the exception of a few parks, since it’s very low lying land and should the sea wall be breached it would be flooded very rapidly. Pretty much all residential developments are placed on top of the relic cliffs so that they have a little bit of protection in the event of a flood.

Thursaston is located on the opposite side of the Wirral and is the exact opposite to New Brighton in terms of development and importance (to some people). Thursaston has very little in terms of human developments. The area is in fact a SSSI (Site of Special Scientific Interest) and is mostly just plants and wildlife with some interesting sandstone landforms. Given that Thursaston lacks human development, little has been done to prevent coastal erosion here. What has been done, though, is all soft engineering.

The cliffs along Thursaston are very susceptible to erosion despite the fact that the waves washing ashore are relatively weak constructive waves. The reason for their susceptibility is their composition. They’re primarily weak sandstone and boulder clay and the bedding layers of the cliffs dip towards the sea, so they’re not particularly stable. The cliffs are also susceptible to sub-aerial weathering and mass movements are frequently take place along them.

Given the low-value land that lies behind these cliffs, the local council and environmental agency has done little in terms of trying to protect these cliffs and what has been done wasn’t particularly effective.

Gabions were placed around the bases of the cliffs and can still be found there today. The idea was to reduce undercutting of the cliffs by the sea but they haven’t been all too successful since the cliffs are still collapsing today. Now days, the main benefit of the gabions is that they provide a (small) habitat for several species of plant and insect, that’s about it. The plants that have colonised the gabions help to make the gabions appear to blend into the environment a bit better too.

Another soft engineering technique that was employed was the introduction of drainage pipes into the cliffs. Given that the cliffs are made of boulder clay, if they became saturated with water they’d become lubricated quickly and mass movements would begin to take place. The drainage pipe was supposed to remove water from the cliffs stopping them from becoming saturated but it has proved to be totally ineffective. This is evident from the fact that a severed pipe bound in concrete can be found just lying on the beach. The cliff collapsed and the pipe fell out and was left on the beach. This is a testimony to both the effectiveness of the pipe and how much the council cares about the cliffs. 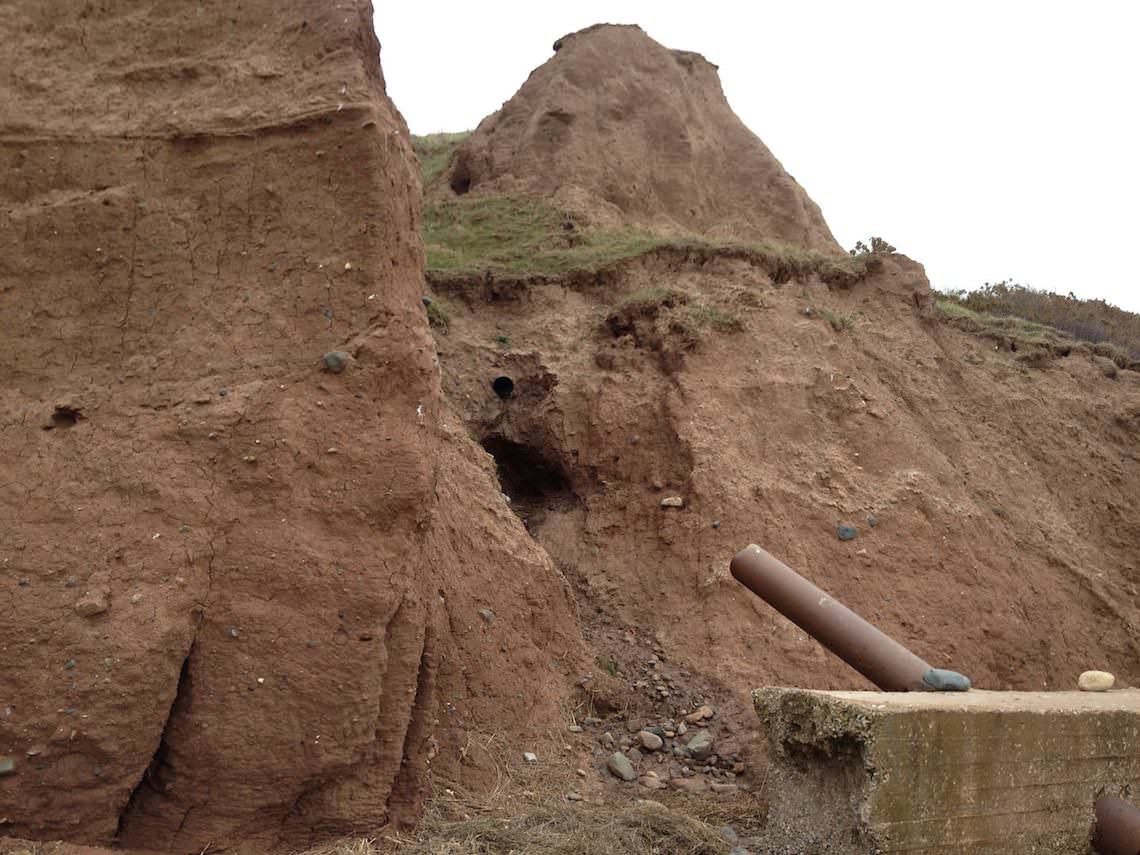 The cliffs are likely to continue collapsing at Thursaston however there is one thing that may save them. A salt marsh appears to be developing before the cliffs and, with a little help from some humans, could be enough to stop the cliffs from collapsing. Unfortunately nobody is helping the marsh to develop and people are going around and removing many of the plants that are growing there as if a salt marsh was to develop, it would prove to be a problem for the sailing groups located nearby.